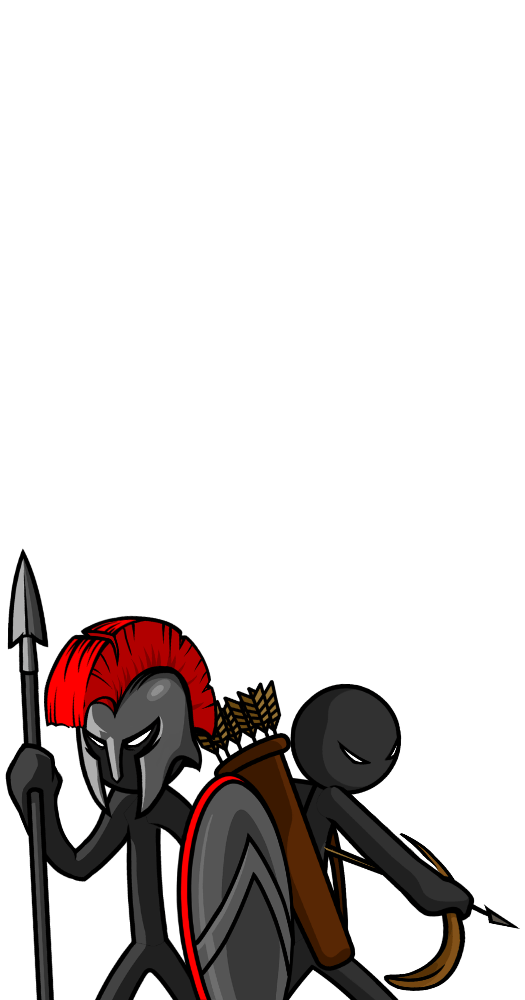 Note: Unlike most flash games, âRight mouse clickâ does work in Stick Empires.
Objective: Destroy the enemy statue before they destroy yours.

Attack (Forward Sword): Will send all offensive units at the enemy.

Defend Shield: Your army will stand in front of your statue.

Garrison (Backwards Sword): Will garrison all units in your base. Garrisoned units are healed of poison, and regain health

What is Stick Empires?

Stick Empires is real time strategy online game (RTS) that takes place in the world of Inamorta, a mysterious, ancient world full of war. Clashing nations battle for dominance as only the greatest empires will emerge from the rubble. Choose the Order, Chaos or Elemental Empireâs and play online against your friends. Customize your Empires items in the armory to personalize your armies. Once the match begins take total control of your Empire, from full tactical management of your units in battle to economic management. Collect gold and mana to build units and unlock a massive selection of unique abilities and technologies located at various buildings within your castle walls. Build with the strategy that best suits your style, from a defensive long term build with walls on the battlefield and castle archers high in your castle towers, to an offensive build of all fast moving units to wipe out the enemy quickly, the options are only limited by your own creativity.

How to research and use technologies & abilities:

TIP: You can use hot keys âQâ and âWâ to cast the 1st and 2nd abilities respectively.
TIP: Some abilities may be passive, meaning they happen automatically. Some Abilities need to be cast (Juggerknights Charge) while others are a toggle on and off (Deads Poison).


Buildings: Only one unit at a time can be trained per building type. Example: If you train 2 Juggerknights then click to train a Crawler, the Crawler will not begin to train until both Juggerknights have finished training.

Q: What is Stick Empires?

A: Stick Empires is real time strategy online game (RTS) that takes place in the world of Inamorta, a mysterious, ancient world full of war. Clashing nations battle for dominance as only the greatest empires will emerge from the rubble.

Q: How do I add my friends and use the Chat system?

A: Click on your chat in the bottom right of the lobby. You will see a unique 3 digit character code next to your username. Ask your friend for the 3 digit code and username then type them into text field beside the plus button in the chat. Thats it!

Q: How do I start a game against one of my friends?

A: Look beside your friends name for a symbol of two crossed swords. Click the swords and an invite to play a game will be sent to your friend. They will have 30 seconds to accept the request, once accepted the game will begin. Note these games are considered non ranked.

Q: Do I need to install anything? what is required to play this game?

Q: Does this game cost money to play?

A: You can play unlimited games of Stick Empires for free as the Order Empire. Unlocking the Chaos Empire and armor items will require Empire Coins or âE Coinsâ which can be purchased.

Q: What are Empire Coins?

A: Empire Coins or âE Coinsâ are a virtual in game currency used to purchase items at the armory so you can customize your units.

Q: What is Gold membership and what does it get me?

A: Gold membership is a monthly subscription which unlocks premium features in the game. As a gold member you will have full access to use the Chaos Empire and all of its 9 unit types and 13 abilities/technologies. In addition New members will receive 1000 E coins as well as 300 Coins every month thereafter to spend on in game items at the armory. New premium features are being added and changed and improved.

Q: Do armory Items give players a Game advantage over players who have not used E Coins?

A: The armory items in Stick Empires change the look and feel of your Empire through customization, however we do not believe in giving any game advantage to players who have paid vs not paid, as this is simply unfair in the gaming world. Unlocking the Chaos race does give players a more diverse Empire choice however we strive to keep both races as balanced as possible and are constantly working to achieve this.

Q: My computer and internet are slow how can I make the game run better for me?

A: Close as many programs and other browser windows as you can for the best performance. Leaving the game window to another tab or chat will cause the game to lag for both players.

Q: What is the difference between Stick Empires and Stick War and Stick Page?

A: Stick Empires can be considered the online game. Stick War is the offline campaign mode. Both take place in the same universe of Inamorta. Stick Page is the associated website with multiple stick figure animations and games.

How to Play FAQ:

Q: How do I get gold and mana?

Q: What am I supposed to do in this game?

A: You need to destroy the enemy statue before they destroy yours. You can do this by collecting resources which can be used to build units and research technologies and abilities.

Q: How do I research Technologies and Unlock abilities?

A: Click on the buildings inside your castle walls to display the available tech/abilities per building. Click on the Tech/ability you want. This will begin to research and cost you resources.

Q: How do I use my units abilities?

A: Some Abilities are passive which means they will be used automatically. Some need to be toggled on and off. While others you will need to select the unit click the ability then cast it at the location you choose.